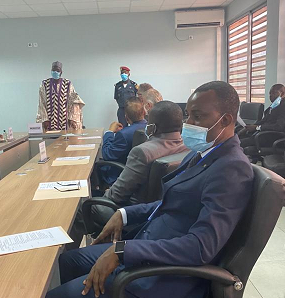 H.E.ISSA TCHIROMA BAKARY grants audience to the delegation from VACE Systemtechnik GmbH Austria.The Delegation was headed by Mr.HORST Bernard ,Head of Division of Said Company,accompanied by Mr.Horst Bradza, Mr.Mirza Mahood and Mr.Ntui Obi from Austria.
The Cameroonian Focal Point that had been spearheading the negociations was headed by The Director General of the Cameroon Invesment Company. The Secretary General of the Ministry and close colloborators were in attendance. The Ministry of Finance , the Ministry of Economy,Planning and Regional Development ,The Ministry of Public Works as well as representatives from the Prime Ministers Office and the Presidency of the Republic were all present to witness the effective kickoff of a decisive moment,a testament to the excellent relations between Cameroon and Austria. The audience lasted 3 hours and covered all topics of importance to both sides.

Cameroon Investment Company : Cross sector Investments is what we do .Everyday with passion.